Leadership can be studied as a tertiary degree, taught in business schools, analysed on the footy field and examined in psychometric tests. Right now, as a political reality it is the obsession of the Twitterverse, the focus of radio talkback, the favourite topic of political journalism and even the most common subject of takeaway coffee queue chatter in Australia. Premiers and the Prime Minister, Chief Health Officers and Police Chiefs embody one brand of regulatory leadership albeit with differing styles, reaching out to us through our screens; nurses, doctors, scientists, community organisers and teachers along with many others offer us servant leadership close to our lived experience of the pandemic. The world looks on also with a mix of curiosity, concern and genuine interest at the leadership contest currently playing out in the USA, a reminder of how we can take democracy and our role in voting for the kind of leaders we want for granted, and thus at our peril.

Understanding and critiquing leadership is important but so is doing it, experiencing it and formation for it.  Mother Gonzaga Barry knew this. She exemplified leadership through her courage in saying yes to the request about which she was initially hesitant, of heading the first group of Loreto sisters to this land in 1875. She demonstrated leadership in the way in which she set about the strategic and systematic building of a network of schools, kindergartens and teacher training colleges for women right across Australia at a time when political federation was only quite new and women in many parts of the nation were still awaiting the right to vote. And she formed leaders, not only in the Institute but amongst the students in her schools. In the very first years of Mary’s Mount Ballarat, senior students became ‘School Councillors’  and were “chosen by the vote of (her) companions and with the approbation of the Nuns”. They were “distinguished by (their) Fidelity, Sincerity and Charity” and held as examples of “kind, sincere and thoughtful Friend(s) of all.”  Mother Gonzaga had high expectations of these students, as both role models in morality and supporters of the values of the school; they were to lead fellow students in their own right due to their election, but also understand themselves as belonging to the larger school community to which they had great responsibility; “ whilst proving themselves true friends to all who need their Counsel, they should also loyally prove themselves true aids to the Nuns, in their difficult yet meritorious and Noble Work of Education.”  This approach to forming young women as leaders was undoubtedly progressive for its time and a valuing of student leadership has been a continuing and core element of Loreto schools since these earliest days.

Today our schools are led by students who are elected by their peers and work alongside staff mentors to inspire, energise and steer the student body. They are immersed in an understanding of Loreto values, the result of deliberate formation programmes and their school experience, which prioritises leadership opportunities of all types, from primary years right through to Year 12 level. The students who hold the role of School Captain consistently represent their schools with grace, intelligence and conviction. One of the most life giving expressions of the Loreto network is the annual LSAC Student Leadership conference, where the Captains of our schools gather to share ideas of effective leadership, focus on deepening their understanding of Loreto values and celebrate their connection.

This year these same students gathered again 9 months later, online this time, to reflect with past Loreto graduates, on their experience of leadership, during a pandemic. The School Captains discussed how their leadership expectations had shifted and adapted to periods of remote learning, social distancing and mask wearing; how their roles as role models for younger students in particular had become even more powerful through their demonstrations of resilience, encouragement and positivity; how their use of technology became more targeted and community minded and how old traditions were adapted and new ones created during their leadership term, all whilst navigating their final year of school studies. 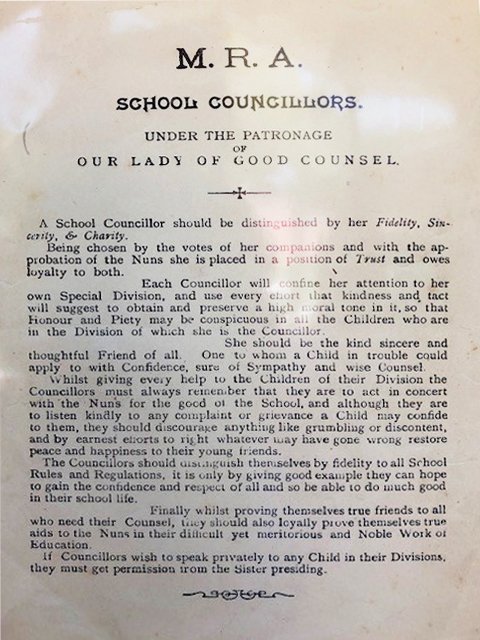 Most powerfully perhaps they shared how their perspective on Verity, the focus value of 2020, had widened, not only to encompass contemporary movements of social justice such as Black Lives Matter but also to enable them to recognise in a new way the true worth of their communities and themselves when many extraneous things were stripped away; for them, the connection between “seeking truth and doing justice” was truly illuminated. That this, the essence of the Loreto mission was their experience of leadership, is a testimony to the foundation created by Gonzaga Barry and her companions, but also the examples of leadership our School Captains see around them, their Principals, mentors and teachers. Mother Gonzaga wrote that she intended to “leave behind (her) something upon which others could build”. The Loreto School Captains of 2020 have done so in this same spirit despite and because of the challenges of this unique year; the leaders of society at large are on notice that a new wave of young women leaders with deeply formed hearts and minds are on their way.