In the lead-up to International Women’s Day 2020, the Loreto network in this part of the world welcomed two new leaders: Margaret Kennedy as Loreto Ministries’ Board Chair and Leoni Degenhardt as Chair of the Mary Ward International Australia Board.  At their Commissioning Ceremonies, we traced Margaret and Leoni’s leadership back to Mary Ward and named the miracle of a network that emanated from a frightened fledgling group surrounding Mary Ward on her deathbed in northern England in 1645.  375 years later the Loreto Province of Australia and South East Asia has called forth two extraordinary leaders to guide and animate the ministries of the Sisters in Australia and beyond: schools, Loreto Vietnam projects and over 20 MWIA projects in nine countries. Province Leader, Sr Wendy Hildebrand, adopted a solemn liturgical call in the commissioning ceremonies, inviting Margaret and Leoni into a collaborative and creative partnership with Mary Ward’s Sisters.  Sr Wendy also anointed Margaret and Leoni, a recognition of their leadership and prayer for strength and healing in their new roles.  The rituals concluded with Leoni and Margaret praying a blessing over their respective board members; their first official duty in their new leadership roles. 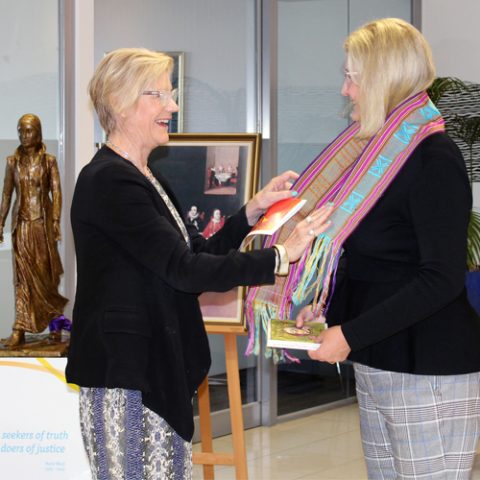